“Sandhurst” Ebbw Vale Q thought to have been built c1875 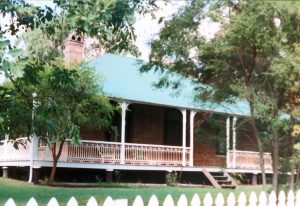 Behind a new high solid fence on Brisbane Road Ebbw Vale Ipswich, stands a brick home that is said to have been built for Mr C. Agnew a brickworks proprietor about 1875, and the bricks are unusual as they have flecks of a purple colour.

In the 1890’s “Sandhurst” was bought by John STAFFORD, who was the owner of the nearby Whitwood Colliery. He with his wife and thirteen children lived in the home and some of the children were married at “Sandhurst”. John died in 1911 and by 1914 the home was occupied by Major William CLATWORTHY, Manager of the Ebbw Vale Brick Company.

There have been a number of owners over the years, and at times the home looked very sad. Today the house is surrounded by a high brick fence at the front, perhaps in the hope of cutting out some of the noise of passing traffic, and wooden fences on the other sides. The house is basically as it was first built, with wide verandahs and little change to the exterior.

Still growing in the front of the house is a very unusual tree – an African Sausage Tree. The fruit on the tree grow very big and resemble a sausage, on a long stem.  It would appear the tree has been there for many years, perhaps as far back as the early 1900’s.  Some of the other old trees have been lost, as have the original buggy sheds. Over times the large grounds have been sold off and the house stands now in the centre of a large suburban lot.

Since the house was built, it has seen many changes, from the days of horse and buggy and a dirt road out the front, to a narrow bitumen road and now to a busy four lane carriageway.

Hopefully “Sandhurst” will remain a part of Ebbw Vale for many years.